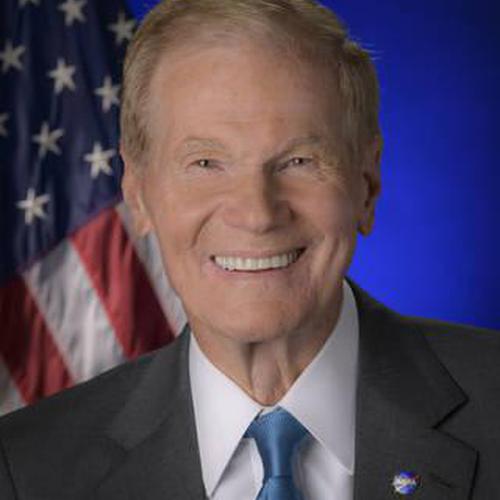 Sen. Bill Nelson was sworn in as the 14th NASA administrator on May 3, 2021, tasked with carrying out the Biden-Harris administration’s vision for the agency. Nelson chaired the Space Subcommittee in the U.S. House of Representatives for six years and later served as the Ranking Member on the Senate Commerce, Science, and Transportation Committee, where he was recognized as the leading space program advocate in Congress.

During his time in Congress, Nelson advocated for NASA’s Earth Science programs and authored numerous pieces of legislation to combat and mitigate the effects of climate change. Nelson was also a vocal proponent for STEM career training and education programs to create and fill the jobs of the future.

In 2010, Nelson and Sen. Kay Bailey Hutchinson (R-Texas) passed the landmark NASA legislation that mapped out a new future for NASA and set the agency on its present dual course of both government and commercial missions. In 2017, Nelson and Sen. Ted Cruz (R-Texas) authored the NASA Transition Authorization Act of 2017, expanding NASA’s commercial activities in space. After leaving the Senate, Nelson continued to serve on the NASA Advisory Council under former Administrator Jim Bridenstine.

Nelson has served in public office over four decades, first in the state legislature and U.S. Congress, then as State Treasurer. He was elected three times to the United States Senate, representing Florida for 18 years. His committees included the breadth of government policy from defense, intelligence and foreign policy to finance, commerce, and health care.